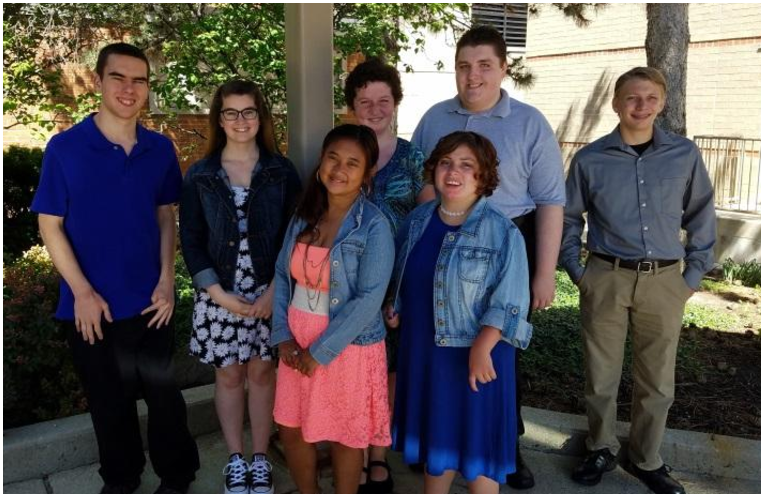 Graduation has many meanings for those who are graduating. It’s a time of freedom, excitement, and progress. It can also be a time of fear for what the future will bring after years in the educational system. This wasn’t the case for our 2017 Project SEARCH graduates. The seven young adults who entered the internship program in the fall of 2016 have no fears for their future.

At the beginning of the year, all seven Project SEARCH interns made a commitment to learn, build skills and achieve their goal, which was to gain competitive (at least 16 hours a week at minimum wage or higher), independent work in the community. With graduation set for May 30 at St. Rita’s, each intern started actively looking for jobs in February. They went out into the community, discussed their new skills, visited sites they worked in at the hospital, and so on. One by one, the interns were flying out the door getting jobs! Once they accepted, they were closed out of Project SEARCH and off to work they went. By May 3rd, all seven interns were hired by local employers and accomplished their goal. This was a first for the program since its start in 2013!

All the Project SEARCH graduates are from area schools: Allen East, Lima Senior, Elida, Ada, Apollo, and Bluffton. They are now working in many jobs around the area: Wal-Mart, Kewpee, St. Rita’s and more. The seven interns were proud of their accomplishments, and could not wait to talk about their new jobs at graduation. Each intern wore a smile as wide as their visions for the future.

At graduation, one of the interns, Michael, was asked minutes before the ceremony to make a speech. He swallowed a big lump and said he would do it. His speech was short and sweet; he talked about his time in the program and how it helped him move forward in life. We were all a blink away from jubilating tears.

David Reed, Manager of Rehabilitation Therapy Services and Outpatient Rehabilitation, was the guest speaker at this year’s graduation. He spoke regarding his department’s role as a new internship site. Not only did he feel that the two interns working in his department gained new skills, but he also saw his employees gain new skills and awareness of themselves. He is excited to start another year with more interns and to continue an ongoing partnership. Aimee Kuhlman, Liaison of Project SEARCH and Director of Communications, EVS, Central Transport and Linens, also spoke. She talked about how each year, she feels closer and more connected to the program and the interns. She could not have been more proud of the interns and their wonderful accomplishments.

The crowd of impressed and overjoyed parents, families, employers, co-workers, and friends watched each intern receive their certificate of completion, wearing caps and gowns and earning the recognition they so deserved. Their future is starting; it’s all theirs and they’re taking hold of it.

Congratulations to each of the seven, impressive, independent, job-worthy, now employees to many companies around the area. You have made an impact in the world, and your success will continue to shine on you!