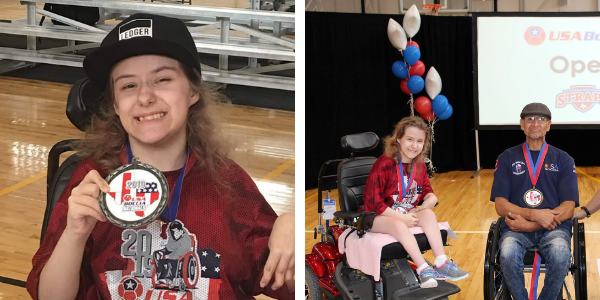 In July, Devin Wolfe won silver at the USA Boccia Nationals in San Antonio, Texas. At sixteen, she was the youngest athlete on the court. It was her first time at Nationals, and she didn’t expect to make it to the playoff round. She certainly didn’t expect to find herself in the final game, facing Nook Gustamante – the #1 boccia player in the United States.

“When I got to Nationals, I was just trying not to lose too bad,” Devin said. At the start of the tournament, Nook watched her play and told her, “I’m going to see you in the gold medal game.” She laughed it off, but he was right. Devin won three games and lost three over the course of the tournament, playing Nook in the final. Her performance earned her second place and the silver medal.

Although Devin was disappointed by the loss to Nook, her first National Tournament was an overall win. She was overwhelmed by the fact that people were there to see her play. Devin just started playing boccia in April, and she’s already made a name for herself. She loves the sport and the bond it forms between teammates and opponents.

“Boccia humbles you. No matter what happens during the match, you have to move on. There’s a close bond. We all have a mutual respect. There’s no disrespect or trash talk, like in other sports,” she says.

Devin and her parents have found a new family in the boccia community. She plays in the Open Class, which means many of her opponents are disabled veterans. “It’s really cool to say I’m friends with disabled veterans,” says Devin.

Devin told me that new people and settings make her nervous, and she tends to stay inside of her shell. However, after talking to her for an hour, I’d guess that every person she meets wants to be her friend. Devin is smart and quick; her personality and sense of humor instantly put me at ease. Over the course of that hour, Devin shared so many interesting details about boccia, the people she’s met, her first flight, and growing up with two older brothers. (She credits them for her competitive nature.)

Devin has Spina Bifida, and a stroke in utero caused her to lose movement in her left arm and leg. When she throws the ball in boccia, she can only use her right arm. While classifying for Nationals, Devin was told that she’s not “disabled enough” to play in the Paralympics. “I was like, wait a second, am I being discriminated against? Am I too able?” She laughed as she told the story, which made her mom and me laugh too.

Devin will continue playing boccia across the country, and her next tournament is in Chicago in December. I know I’ll be rooting for her, and I can’t wait to hear about her future success.

*Boccia began as a sport for athletes with cerebral palsy – but it’s now open to athletes with loco-motor disabilities. It tests an athlete’s coordination, accuracy, concentration, and strategy. Boccia is played indoors on a smooth, flat court. Athletes throw, kick, or use an assisting device to propel leather balls onto the court, hoping to land closest to the jack – a white target ball. Learn more about boccia here.

You can read more about Devin here.

*Nook Gustamante is pictured with Devin, in the right photo above.