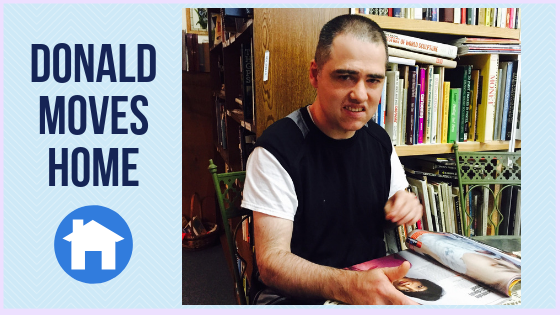 Donald enjoys painting, being outside, playing games, working, and anything to do with water. He has had many successes in his life, but he has also had struggles along the way. Since birth, Donald has had many challenges. He was premature, had poor weight gain after birth, and struggled with high fevers and resulting seizures. He seemed to be developing typically in early childhood; however, problems were evident when he stopped talking as a child. Donald also began acting out toward family members and others at Marimor School. Eventually, to protect him and others from harm, Donald moved to Tiffin Developmental Center (TDC). (Editor’s note: This type of placement was more common when Donald was a child and is not an option in today’s system of services. As years progressed, more and more individuals began moving from state institutions into community homes. )

At Tiffin, Donald grew up, completed his schooling, and began to work in a TDC sheltered workshop. Opportunities for involvement in the Tiffin community were limited in such a large, state-run facility, so Donald and his team began considering a move into a smaller community home. In 2010, Allen County Board of Developmental Disabilities (ACBDD), along with TDC and his guardian, determined that Donald should be given the opportunity to return to his hometown of Lima. This was such an exciting time for everyone; however, TDC was the only home that Donald had known for many years, so everyone involved knew it would take him some time to adjust.

Donald’s SSA and Behavior Support Specialist worked closely with Benchmark Human Services and Marimor Industries to prepare a home with the structure that Donald would need to be safe and healthy in his community. Donald’s return to Lima has had many challenges along the way. Donald is most comfortable with routines and consistency in his day. As with many of us, change is hard and it was the same for Donald. When he returned to Lima, Donald had difficulty adjusting to the small apartment that he shared with a housemate. Routines that Donald had at TDC were no longer possible in his own home. Donald struggled with so many changes happening so fast. Medications that helped Donald manage his actions were mistakenly reduced during his move to Lima, making his transition even more difficult.

A partnership formed many years ago with Coleman Behavioral Health has consistently provided Donald with vital mental health treatment. (Currently, ACBDD sends one Behavior Support Specialist to Coleman, two days a month, to help manage the care of patients with developmental disabilities. This is an essential service to many individuals we serve.) Donald’s team has worked diligently to manage his medication needs and to develop special strategies to help Donald fit into his new home and community. Donald has overcome many of those early challenges in his move back to Lima. It is very important for Donald to have staff who are sensitive to his needs and accept his routines and actions. Donald’s daily staff are vital to his success! Today, it is more difficult to find and keep Direct Support Professionals due to the shortage the industry faces; yet it is one of the most important aspects to his success.

Through the years, Donald has slowly become more involved in his community. Some of the special strategies that were initially developed and utilized are no longer necessary in his home. You may occasionally see Donald at the park or shopping for his groceries with his staff. He is now able to enjoy his favorite activities. Most importantly, Donald is often seen smiling or laughing, which shows us that he is happy with his life. For his team and family, that has made the work worth all the effort!