For the Love of the Game…and the Guys

When you go to a Lima Locos game, you are likely going to meet or at least become aware of their Number One Fan, Josh. About a half hour before the game is to start, Josh arrives in the dugout in his Lima Locos shirt and begins to mingle with the players. You can hear warm, excited “Hey, Joshy” greetings. For some he has a hug or a fist bump. For most, he will roughhouse, shoving, elbowing, grabbing them from behind, picking them up . . . literally. He will ask about their families . . . “are your parents going to be here tonight?” And always a word of encouragement. The affection Josh shows the players is totally reciprocated. The players look forward to their interaction with Josh. 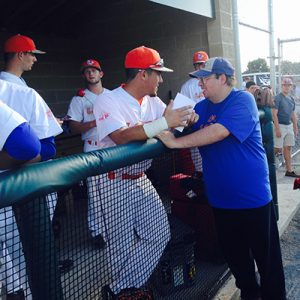 Shortstop David Chabut says he just loves Josh. When asked what Josh contributes to the team, he said, “HEART.” Chabut said that Josh is just awesome. He gives the team life when they’re down. Josh is never down on them, even if they lose. He encourages them to get one more win. Outfielder Ross Adolph said that when Josh shows up, everyone brightens up. Adolph said that it is awesome to have Josh around because he adds excitement all of the time. Being around negative people brings a person down, but Josh is never like that. He brings the team back up. Josh frequently huddles with the team and adds encouragement. And when they win, the coach has to hold him back.

Before the game, Josh can be seen playing catch with the guys. He always has his baseball mitt with him. If the guys are running to warm up, Josh is right there beside them, trying to throw them off balance. When the game starts, Josh takes his seat with two others and takes on the role of batboy. When a player comes off the field, there is always a high five from Josh. Later in the game, Josh can be observed working the crowd. If he can get his hands on a rose, he will find a pretty girl and present it to her. The regulars all know him and talk with him. Fans brighten up when Josh comes around. 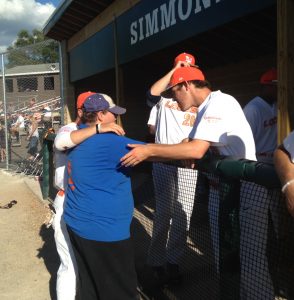 Coach Chad Ehrnsberger began his coaching career with the Locos four years ago. When he arrived, Josh was there, a staple for the team. Josh’s aunt, Diana Diller said she wasn’t sure what would happen with a new coach and totally new players that year. However, owner Steve Meyer was there and quickly let the team know that Josh is part of the team. With his arm around Josh, he said, “We have one returnee this year.” Coach Ehrnsberger was quick to see the value added by Josh’s participation on the team. He said Josh keeps everyone relaxed and is a great morale booster. “The guys really like having him around,” said Coach Ehrnsberger.

Josh’s aunt Diana is the one who always brings Josh to the games. She gives him a season ticket for the Locos for his birthday every year. They have been faithfully attending for about 20 years. She said that year after year, the players are really great with Josh.

The story would not be complete without a word from Josh himself. When asked about the Lima Locos and his involvement with them, Josh said, “I love the coach. I love the guys.”

The relationship between Lima Locos and Josh is a spectacular example of what is right and good in the world. Josh’s life is greatly enriched by the acceptance and love he receives from the players, board members and staff of the team. The Lima Locos benefit greatly from Josh’s enthusiasm, encouragement and love. This all happens because his aunt is willing to invest her time in making sure Josh gets to all of the games. Josh’s disabilities are not a barrier to the very special relationship that has formed between him and his team, the Lima Locos. May we all look for opportunities to bless and be blessed by a relationship that some would find unlikely.