Owen began his journey with Early Intervention in August of 2021. Before starting services, we had some concerns with Owen’s ability to express himself through words. When Owen was an infant, he would constantly have double ear infections, which we thought was the reason Owen was delayed with communication. At daycare, he would become easily upset and scream, bite and lash out on his caregivers. This would cause his caregivers to attempt to figure out what Owen was needing or wanting. If we could not figure out what Owen wanted, he would resort to banging his head against the floor intentionally or uncontrollably.

Being an educator and a mother – and understanding what happens when children do not get early intervention – made me want to be sure that we did everything we could to help Owen be the best he could be. The first step to help Owen was to contact our county’s Early Intervention program. We live in Allen County, Ohio, and our Early Intervention program is through the Allen County Board of Developmental Disabilities (ACBDD). After connecting with ACBDD, we were introduced to Marisa Odenweller, Speech Therapist, and Alyssa Plontz, Service Coordinator. These ladies were truly a blessing to our family, guiding us through the evaluation and assessment process. Owen was determined eligible for Early Intervention services, and we discussed what our goals, priorities, and needed supports were for Owen. A plan was made, and a schedule was developed though the Individual Family Service Plan (IFSP).

After Owen’s evaluations, we discovered that he is delayed in expressive communication. Owen was able to label many items in his everyday life. He struggled with putting two or more words together to form a sentence. Through his journey, we were given strategies, activities, and support to help Owen develop in his communication. Through his therapy every month at our home, Owen was able to begin putting two- to three-word phrases together, such as “More, please!” and “Ready, set, GO!” The first time I heard him say a complete three-word sentence was when we turned his car seat from backward-facing to forward-facing, and he exclaimed with fright, “Mom, watch out!” while pointing to the cars coming from the opposite direction.

An incident occurred early on in our journey, when Owen banged his head against his crib rail in the middle of the night. We were rushed to Nationwide Children’s Hospital, and we discovered through imaging that he had a Chiari I Malformation. This is when a portion of the brain, called the cerebellar tonsils (the lower part of the cerebellum), extends out of the skull and into the upper part of the spinal canal. Symptoms with Chiari l Malformation include dizziness and balance problems, double or blurred vision, numbness, spontaneous gagging and vomiting, sensitivity to bright lights, and severe headaches in the back of the brain. Children who have been diagnosed with this condition show signs of irritability, head banging and nighttime awakening. We shared this new information with our phenomenal speech therapist Marisa. She was able to provide us with hand-outs and resources to assist with head-banging. There is no way to know for sure whether the Chiari I Malformation was the reason for his speech delay, but it did help us further understand what Owen needed and how to assist him. One activity that we incorporated into our home was working with a Mr. Potato Head to teach Owen different parts of the body and to use it when he experienced a headache or if his ears were hurting him. At first, when we asked what was causing him pain, he would point to the Potato Head’s head or ears. He can now tell us what is bothering him by saying “ear hurt” or “head hurt.” This allows anyone who is caring for Owen to help him get through his episode by providing him a calm corner, dimming the lights, and giving him medicine. This was such a huge success that his daycare purchased Mr. Potato Heads for his classroom to aid with children having difficulty expressing themselves. 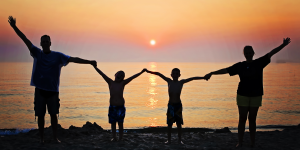 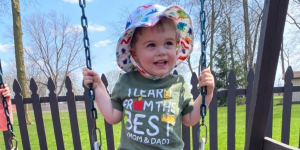