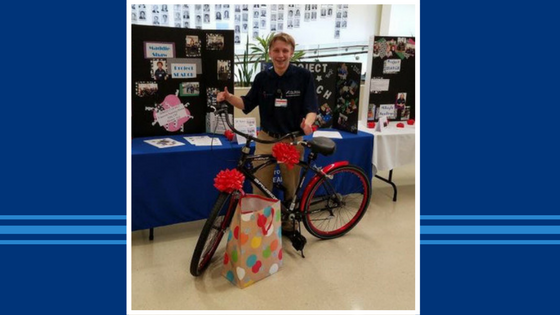 Perseverance: The Story of Mike and A Bike 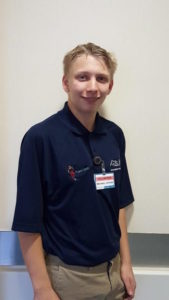 Perseverance can take you a long way, if you’re willing to try. That’s something Michael Williams knows for sure; perseverance is one of his greatest strengths. Michael was an intern with Project SEARCH, and he recently accomplished his goal for the program: community employment!

Michael had a rough road before he started Project SEARCH. He worked for a few employers in high school and during the summers. He was let go from one place after new owners took over. He also worked for two family businesses. He came to Project SEARCH to gain experience and work on his soft skills – like communication, social awareness, and time management. He knew it couldn’t hurt to have St. Rita’s on his resume, too!

During his time in the program, Michael was up for any challenge. He started in Health Information Management for the first 10 weeks. He caught on very quickly and learned that working with all women wasn’t that bad! They enjoyed his attitude and his conversations. He also learned he couldn’t always have the freedom to talk all day long.

Next, he moved onto an internship in Supply Chain and Distribution. He learned the operations
of the department and again, he caught on quickly. From the second week until the end of his tenth week, Michael worked independently, as an actual employee and not just an intern. This made it hard for him to leave, because he built great friendships and discovered his own voice in the workplace.

Throughout his time at St. Rita’s, Michael often talked to people about his bike, which was stolen in the fall. He called local law enforcement every week to check on his bike, to no avail. It was never found, but that didn’t stop him. Even into early January, he was persistent and called with hopes of good news. This inspired his co-workers, who took up a collection to get Michael a new bike. 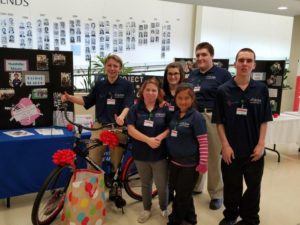 In March, during the annual Project SEARCH internship presentations at St. Rita’s Medical Center, Michael’s co-workers presented him with the new bike. Michael also received a bike lock, helmet, bike lights and a gift card to Walmart. He was surprised by the bike and the outpouring of people who cared for him. The entire department from his second internship showed up to see his excitement.
Michael has inspired many people to be more courageous and to go after what they want, even it is takes more energy than they want to give.

Unknown to Michael, his Project Search instructor, Leigh Taylor, nominated him for the R.A. Horn Award for outstanding achievement during the State Services Team 6 Expo on March 10, 2017. He received a certificate and had the opportunity to go on stage, where he was recognized for his perseverance. It was an honor that he definitely deserved!

Michael has now graduated from Project SEARCH, and he’s working at a part-time job in Lima. He continues putting forth his best attitude and showing his incredible work ethic.

And now, a note about the author (who was too humble to mention her own nomination for the Franklin P. Walter Outstanding Educator Award).

Leigh Taylor is the Intervention Specialist for Project SEARCH. This is her fourth year leading the outstanding transition program. In its first three years, 31 interns from six Allen County schools and two other counties have successfully completed Project SEARCH. Currently, 80% of the interns who’ve completed the program are employed in the community. Thanks to Leigh’s excellent communication skills and dedication to the program, it has grown tremendously. During the first year, there were ten hospital departments willing to accept student interns. There are now eighteen departments accepting Project SEARCH interns!

During instructional time, Leigh also teaches the interns about a variety of topics, including internet safety, budgeting, resume building, and employee skills. Leigh has an excellent rapport with the interns and keeps in touch with graduates through bowling parties and a summer picnic. She recently formed a parent council to support parents of new and future interns.

Leigh has made such a difference for the interns in the Project SEARCH program at St. Rita’s. We can’t thank her enough, and we are so happy to recognize her accomplishments!

To learn more about Project SEARCH, please visit our webpage!