If you come to St. Rita’s Medical Center and see the Project SEARCH logo, you might wonder what it means. Maddie Shaw can tell you. She is one of the Project SEARCH interns at St. Rita’s Medical Center.  Maddie is a bright, young adult who wanted to gain more experience and refine the skills she already possesses. She attended school in her hometown of Ada, Ohio before venturing over to Apollo Career Center, where she learned skills in Hospitality and Floral Design.

Maddie decided to apply to Project SEARCH during her senior year, after her parents brought her to the Open House in January 2016. There, she met the current interns and learned what they were doing – working! Maddie was honorably accepted into the program, and her IEP was re-written to meet her needs. Her diploma was deferred for the time she would be in Project SEARCH. She walked with her friends during Ada’s graduation ceremony, enjoyed summer with her family, and started Project SEARCH in late August 2016. She was joined by students from other area schools, who were also interested in gaining work experience and acquiring new skills.  Maddie was very excited, and after visiting the various internship sites, she created a wish list of sites she would like to try out. 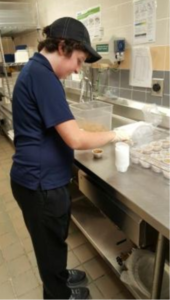 Maddie started her first day in Dietary, where she worked with her mentor, Christy Talbert.  Christy welcomed her as a brand new employee; she introduced Maddie around and showed her where to find everything.  Ask Maddie about working in the kitchen and she will tell you about cutting massive amounts of strawberries!  Maddie’s job was to put all the grab-n-go items together and clean her area. She also worked in the dish room and inventory areas, but she was more interested in food prep and working in the lobby. Christy said of Maddie, “She came to work with a great attitude and big smile. She brightened everyone’s day.”  Maddie successfully completed her 10 weeks and said her goodbyes with a two-week notice. Throughout that time, she also participated in mock interviews and prepared for job development.

After Thanksgiving, Maddie moved into a new internship with David Reed, Manager of Rehabilitation Therapy Services & Outpatient Rehabilitation, and his team in Physical Therapy and Pediatric Rehab. David says “Maddie is doing an EXCELLENT job! She is very friendly, smiling, and her work is done extremely well. The staff here has made several positive comments about her as well.”  Maddie has seven more weeks in her second internship, then she will start job development in February and she plans on getting a job. Maddie looks forward to a future working and making money to buy her own things. 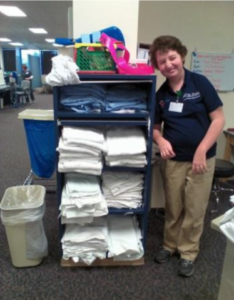 To learn more about Maddie’s experience and to hear from other interns, attend the Project SEARCH Open House on January 11 from 6-8 p.m. in the Auxiliary Conference Room at St. Rita’s Medical Center, 730 W. Market Street.

At the Open House, you’ll also find out how to apply and become a Project SEARCH intern like Maddie!