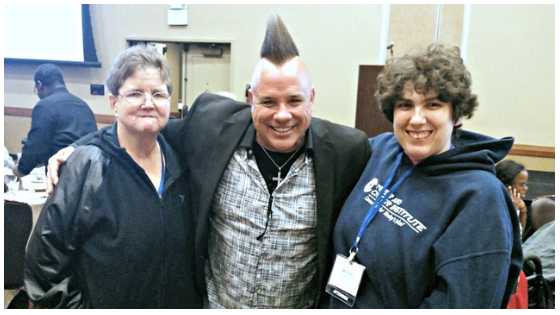 Every October, two organizations team up to provide a three-day conference that aims to provide advocates, families, and professionals with opportunities to learn from the experiences of others and hear the most up-to-date information in the field of developmental disabilities. 2018 marks the eighth annual Synergy Conference, hosted by Professionals, Advocates, Resources – Ohio and Ohio Self Determination Association. I had the pleasure of attending the conference with Michelle and Kelly, two dedicated self-advocates who became really good friends over the course of our trip.
Leading up to the Synergy Conference, both ladies were really interested in hearing the keynote speaker on the first day. In order to make it on time to the Kalahari Conference Center in Sandusky, we needed to leave really early. These ladies were motivated to be ready to go by 5:15 am, and it was most certainly worth the early morning alarm to hear Christopher Milo and the 13 Messages From Milo.

At first glance, Christopher Milo does not look like an internationally renowned concert pianist and motivational speaker with his six-inch tall mohawk; however, his music and life story touched Michelle and Kelly in a resounding way. He shared stories about his childhood during times when he was bullied for being interested in music, when he was paralyzed from the waist down, and his motivation to pursue his passion to play the piano. Christopher also shared the story behind his hair style choice: One day he met a four-year-old girl who was hospitalized while receiving treatment for her cancer. As the two talked a little, the girl kept motioning him to come closer and closer until he was right beside her bed. She reached out with some scissors and cut one side of his hair really short. Looking down at the hair that was no longer attached to his head, he asked if she was going to cut the other side too. Christopher promised that he would keep the haircut as long as she would keep fighting, and he still has that haircut today.

When faced with adversity, Christopher instructs us not to “focus on what’s wrong, but [to] focus on what’s missing from the situation.” The 13 Messages From Milo encourage us to know that each person has something special that can make a difference in the world. These messages are trust, be positive, be genuine, accept, love one another, listen, communicate, work together, be curious, inspire, coach, use your talents, and be creative.

Kelly and Michelle enjoyed the music that Christopher shared (he even played some of his original
music for us), and they loved the mohawk, but what really resonated with them is how genuine he was
in sharing his story and how it made them feel. It reminds me of the quote by Maya Angelou, “I’ve
learned that people will forget what you said, people will forget what you did, but people will never
forget how you made them feel.”

Note – 13 Messages From Milo was the name of Milo’s presentation at Synergy 2018, and he also has a book.

For another great take on the Synergy conference, check out this blog!