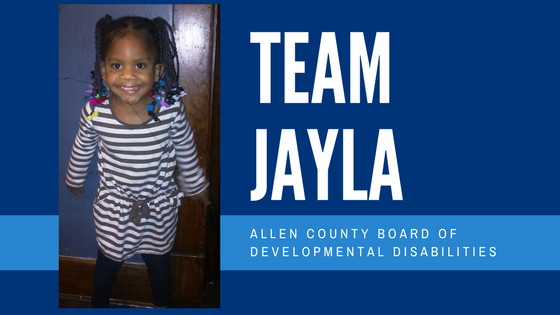 Our Early Intervention staff had the pleasure of serving Jayla Hall and her family until Jayla started preschool in December. The team that worked with Jayla is a shining example of collaboration at its best, and we are so excited to share her story with you.

After meeting Jayla and her family, we quickly assembled a team to meet her unique needs. The team included her mom, Tavionna, and her Trinity Daycare teachers, along with Early Head Start staff, Children’s Developmental Center staff, a Physical Therapist, a Speech Therapist, Lima City School staff, a Family Advocate from the Educational Service Center, an ACBDD Early Intervention Specialist and Service Coordinator,  several medical providers, and others who wanted to ensure Jayla and her family had the support and information they needed.

At the time, Jayla was two years old. She had previously tried hearing aids, which didn’t work. She also received a cochlear implant – but she still wasn’t able to hear or develop speech skills. So Tavionna decided to use American Sign Language (ASL) as Jayla’s primary communication system. With ASL, Jayla would be able to interact with her family and the world around her.

Tavionna was already using some sign language during her daily routines with Jayla. When she decided to move forward with ASL, the team acted quickly. They started providing the tools and resources Jayla and her family would need to be successful. This was a critical time in Jayla’s development; typically, an interpreter would have been working with a child since birth, and Jayla was now two years old. She was a bit behind her age level, so the most important thing was to increase her language level right away. She needed someone who could not only interpret, but could work with her to facilitate language. Through Ohio School for the Deaf and Hands & Voices, the team found an ASL instructor who could help in both areas.

The instructor accompanied the team on home visits and taught Tavionna how to use ASL at home. The hands on – literally – approach turned out to be a great benefit to the family. Jayla’s team helped Tavionna mold Jayla’s environment, so she could successfully learn everything she needed at such a young age. In addition to the in-home instruction, the team met on their own for ASL classes specific to Jayla. The ASL instructor shared materials and information with the team, so they could fully understand and serve Jayla’s needs.

Right before Jayla turned three, her team continued to meet with the Lima City School staff, so they could figure out how to best serve Jayla when she started preschool. This total collaboration by the team and Jayla’s family was so important. It was a wonderful journey with an amazing family and an amazing little girl.  She’s now a happy and learning preschooler! In addition to preschool, Jayla goes to daycare and attends the Children’s Development Center. She continues to receive services from the Allen County Board of Developmental Disabilities, and we’re honored and happy to be a part of her life!