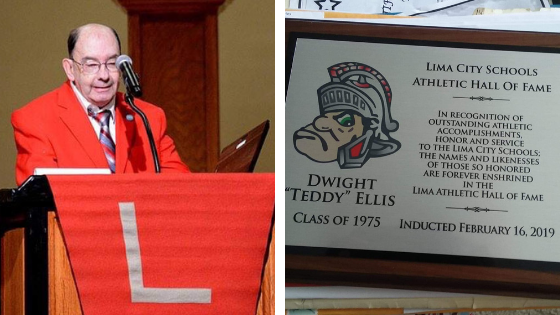 Ted, A Hall of Famer

It was quite an honor to attend the Lima Senior Boys Basketball game on February 15, 2019 to see Dwight “Ted “ Ellis be recognized for his induction into the Lima City Schools Athletic Hall of Fame. Ted was so proud of this honor and it was evident many of his friends were there to support him. On Saturday night the formal banquet was held, where Ted received the plaque pictured above. He was also showing off his red jacket that shows his spirit for Lima Senior High and the OSU Buckeyes.

Ted received this honor for his years of service to athletic programs throughout Lima City Schools. He is an alum of the Class of 1975. He was just a small boy when he was already deemed a huge fan and began helping out any for any sport he could. Ted used to spend a great amount of time with the Washington McKinley Bulldogs baseball team as early as 1966. He soon was named the team’s bat boy. That job grew into Ted being named the manager of the South Junior High Basketball team from 1969 to 1972. Then when Ted became a student at Lima Senior High, he was the team manager for the basketball team until he graduated. Many called him the coach’s ‘right hand man.’ Ted continued to serve Lima City Schools long after graduation. He proudly tells his friends of the number of years he has ‘ran the clock’ at the Saturday morning football events. He is a regular in the Press Box.

Ted was very proud on Friday night to be able to be the ‘honorary Spartan’ and join the team on the floor for pre-game activities. He looked great in the Spartan costume. Ted, of course, cheered for his favorite home team against Findlay High School. The Spartans won 71-51.

Ted is very proud of his alma mater, and we are all very proud of Ted for his years of dedicated service to Lima Senior High School. I am very proud to know a Hall of Famer. Way to go Ted!