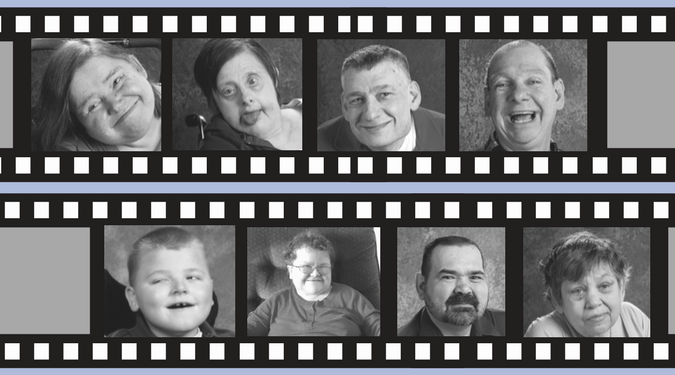 The Hope We Have

***In the last six weeks, we’ve lost eight individuals we serve or served. This is unprecedented for us. I wrote the following blog before June R. passed away today. I am going to post it, knowing we still have yet another funeral in our future. June was a very special young lady, and she will be dearly missed. ***

As of today, our agency has faced the loss of eight individuals we were serving or had served in the past. I had the blessing of attending seven funerals or celebration of life events. This gave me the opportunity to reflect and compare the seven unique ways these people were remembered. My husband was able to attend five of them with me, which gives me the opportunity to see events through his eyes as well. I decided to write this blog at funeral number five, as the words of a pastor who had never performed a funeral touched us deeply.

Being human means we will suffer loss. Whether it is a big game, a favorite ring or someone we love – it is loss nonetheless. By far, the death of someone we love is the most difficult human experience. Whether a mother, brother, friend or co-worker, we lose a relationship that was important to us. Relationships are what make being human bearable. So the loss of that relationship provides a void we did not know before. Some voids are bigger than others. For one mother who lost her son this past month, the void will be daily and the loss great. Each day she will take to living a whole new way, because she was the primary caretaker of her son. Where to sit in a gym for another son’s basketball game is a simple choice that will be new for her – the void will be real as she makes that choice. One staff member, who worked more than 25 years with the individual being remembered, shared personal stories, both funny and serious. The void will be very real each time she works on Suite B. Others who attended the services or heard of the person’s passing were reminded of times gone by and important relationships they have lost through the years.

Each of the seven funerals was unique. Each person’s circumstance of death was unique. Six were under the age of 65. By the world’s standard, they were young. Some had been ill for a great time, and their journey through hospice came to an end. Most had short, quick illnesses that barely gave their families time to breathe as they lost their loved one. Five of them connect us and Champaign Residential Services. One was a child of only 10 and a student at Marimor School. One man who passed was so excited to finally get his own apartment in 2017. Several only had cousins left to grieve. Three times I saw parents saying goodbye to their children, which is never the way things are supposed to work out.

We laughed and we cried as caretakers, families and pastors told stories. At Rhonda’s, I heard my husband laugh out loud, as he did not know Rhonda and her shenanigans. Her favorite color was red and stories of her fire were befitting her tribute. Many staff members from the Mary Ann Brown facility wore red in her honor. At Steve’s, his brother, also someone we serve, sang “Jesus Loves Me.” Bruce wanted no formal funeral, so his mother had family and friends gather to share memories during visitation. Nyla’s was on a bitter cold day with only about 13 people present. Most were staff, which told me the power of human relationships in the work we do. At Chuck’s, the funeral home was set up for just a handful to attend, so they had to carry in chair after chair at the last moment, with his housemates sitting in the front row. There, Mr. Markward reminded me of a story about his late wife, who was a long time Board employee. He told me that she still has a small string tied to his finger. When she’s ready, she’ll untie the string, so he can join her and Chuck in heaven. For Owen, there were hundreds of mourners at the visitation, as the small town of Bluffton honored their young hero. I can hardly type as I think of his Superman bowtie and the words of his mother to me at the visitation. And our staff, who loved him dearly and will miss his smile. The final funeral (until today) was Janette’s, and it was very small. Only seven people attended. Only one family member. To remember her, Monica N. of CRSI led the service and handled it beautifully. I also enjoyed the piano rendition of “I’ll Fly Away.”

While all very different in place, age, numbers and details, each celebration of life had a common theme. At each and every one of them, the word HOPE was used over and over. We live our lives on the word hope – hope for a vacation, hope for good health, hope to marry someone we love, hope for a baby… However, the strongest hope is when we believe we will see our loved ones again. The string tied to Mr. Markward’s finger is his hope. Rhonda’s aunt told us that Rhonda was able to join her parents, who lived to care for her through good and bad times. That was her hope. A song played at one funeral, “I Can Only Imagine,” which shares hope of the moment one sees Jesus face to face. All this caused me deep reflection on Sunday, January 21, while wearing my O shirt at our Sunday church service, when our pastor ended his sermon with “Do you live your life so others can see your hope?”

It may seem unusual to speak of hope in the midst of such heavy times. However, our relationships remind us that we do have reason to hope. The individuals we have mourned and celebrated this past month have been a source of hope and joy for the countless people whose lives they have touched. Those of us who live on have hope that they are now free from suffering, in a better place, and that we will see them again. Hope is what allows us to go on after months like this one.