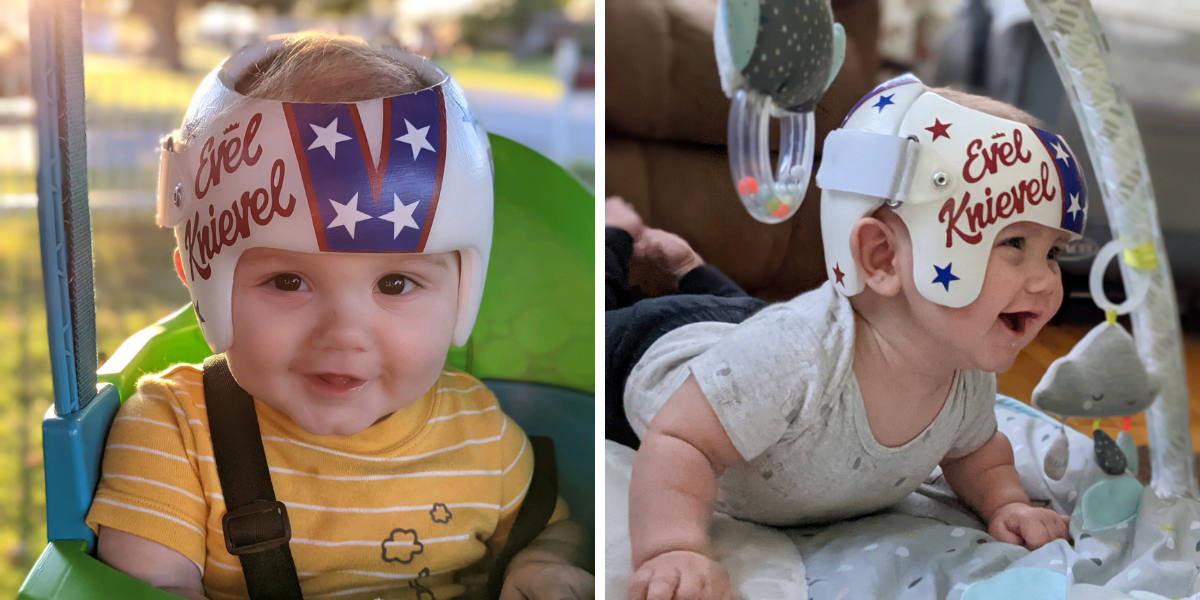 Why Do Babies Wear Helmets?

When you hear the word “helmet” what comes to mind? I think of the helmet that children and adults use when riding a bike – or maybe even a motorcycle. It’s something worn to protect your head in case of an accident, right? But what about when a baby is wearing a helmet? Cranial molding helmets*, or cranial bands, are an approved, FDA treatment for shaping a baby’s head after a flat spot has formed. Since helmets are used while the head is still soft, it does not squish or squeeze any part of the head. It simply makes contact around the head and acts as a mold for the head to grow into, making the head round again.

Cranial helmets are not a new thing; they have actually been around since the late 1970s, but they’re being used more now. Why is this? When the Back to Sleep campaign began in the United States in 1994, there was a massive increase in head flattening. Back to Sleep is now known as Safe to Sleep, and it’s a government-funded campaign by the National Institute of Health. It’s supported by pediatricians, based on the evidence that infants sleeping on their backs significantly lowers the incidence rate for Sudden Infant Death Syndrome (SIDS). While this does help with SIDS, babies sleeping on their backs means there’s an increased chance of developing a flat spot. Flat spots can form due to a multitude of reasons. They can form in-utero from positioning, too much time on their back after birth, torticollis (tightness on one side of the neck), plagiocephaly, or even brachycephaly. The list goes on and on. And whatever the reason might be, helmets are a safe and effective solution. (Not to mention CUTE.)

As a mom, I only want what is best for my baby. I did tummy time and played on the floor as much as possible. When I started to notice a flat spot on my baby’s head at three months old, along with him having a preference to look to the left, I did repositioning and stretches with the help of a pediatric physical therapist – who happens to be my coworker. I work in Early Intervention, so I thought I knew everything to look for, and I never imagined he would need a helmet. Except he did, and that’s okay. When I go back and look at all the pictures from the early days, his head is tilted to the left in every single picture and I didn’t even notice. Talk about mom guilt! While the repositioning and stretching helped with his torticollis, it didn’t improve his flat spot, so we got a referral from our pediatrician and went to get measured. The process was very quick and easy. He was placed in the mild/moderate category and we were told that he qualified for a helmet. I think the helmet was more of an adjustment for my husband and me than it was for our little one. He took to it with no problems, except maybe a stinky sweaty head most days. He is now a little over three months into wearing his Evel Knievel decorated helmet, and with continual updated measurements, he is already almost to a completely rounded head!

If you are concerned with your baby’s head shape, talk with your pediatrician. You can ask for a referral to physical therapy or an orthopedic clinic. Get a second opinion if you are still not sure. Just know that if your baby does need a helmet – it’s okay. Life will move on and the helmet will be off before you know it!

(I ordered my son’s helmet stickers from blingyourband.com.)

*Cranial molding helmets are just one type of helmet. Babies and children might wear helmets for reasons not related to flat head syndrome.